Our next installment of the 2018 Live Healthy State Health Assessment covers cross-cutting.  Because the document is 346 pages, we will summarize each section.  Check out our previous posts:  overview of the report, South Carolina demographics, and leading causes of death and hospitalization.  Data is analyzed from 2010-2016.

Income inequality affects health, poverty, crime, violence, and more.  Counties in the Pee Dee region of the state, such as Williamsburg, Geogetown, Marion, and Clarendon, had the highest rates of income inequality.

Factors such as alcohol and drug use, demographics, social and economic inequality, and the availability of firearms can impact the incidence of crime.  Although there was a decline in violence crime from 2007-2016 in South Carolina, the violent crime rate was higher than the national rate.  Property crime also saw a decrease over the decade, but was still higher than the national rate.

South Carolina is the 2nd lowest incarcerated state in the Southeastern region with a rate of 414 (per 100,000 population). 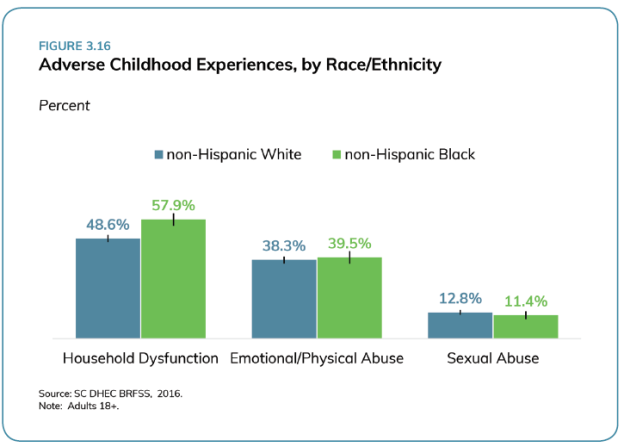 For more demographics, charts, and graphs about every Cross-Cutting section, view the full report.