Getting out into our nation’s communities and witnessing the impact federal nutrition programs have on lives leaves a lasting impression. On a recent trip to Vermont, I saw firsthand how USDA supports America’s nutrition safety net, helping a new generation of Americans get a healthier start in life. Thanks to programs like WIC, participating mothers and their children can look forward to a brighter future. — From the US Department of Agriculture blog

Epilepsy is common, but how much do you know about it? Get facts about this condition from neurologist Walter H. Peters, MD, Palmetto Health-USC Neurology.

Epilepsy is a neurological disorder of the central nervous system in which abnormal electrical discharges in the brain can cause seizures or periods of unusual behavior, including loss of awareness or consciousness. It is estimated that 65 million people worldwide live with the disorder. One-in-26 people will develop epilepsy in their lifetime and anyone can develop it, though children and the elderly are at the highest risk. — From Flourish, Palmetto Health’s blog

Beth Addison is a mom of two teenage girls. She was diagnosed with breast cancer one year ago after a 3-D mammogram at Lexington Medical Center.

She underwent a year of treatment that included chemotherapy at Lexington Oncology, a Lexington Medical Center physician practice.

Beth also was featured as a model in our Women’s Night Out fashion show this year. — From Lexington Medical Center’s official blog

Even in this modern era, when so much can be done remotely, there are many tangible benefits to having “boots on the ground” when doing business overseas. That’s the thinking behind the FDA’s foreign offices, which play a vital role in inspecting foreign manufacturing facilities, gathering market and industry information, and building closer relationships with local regulatory bodies, all in the interests of protecting the public health of Americans.

This month marks the 10th anniversary of the opening of FDA’s first foreign office, in Beijing. — From the US Food and Drug Administration’s (FDA) blog

A Mini-Symposium on Cumulative Risk Assessment in the Occupational Setting

Identifying and evaluating the combined effects of multiple exposures, known as cumulative risk assessment (CRA), is a tricky challenge. — From the Center for Disease Control and Prevention’s (CDC) NIOSH Science Blog

In 2015, DHEC’s Mary Bright wrote a blog post about her fight against breast cancer, the most common cancer among women. In late 2017, Mary learned that almost two years to the day that she had rang the bell as cancer free, it had returned. She shares her latest story in a two-part blog series. Today: Part 2 of 2.

If I’m Stage IV, what are my chances?

No one can say.  What I have now is considered a “chronic disease,” like diabetes.  I will be tracked and tested and treated every time my numbers increase or drop.  Unlike diabetes, this disease will eventually kill me.  It probably won’t happen in the next hour or day or week or month but one day it — or possibly a cause related to it — will claim my life.

And I still have no idea how this happened and, sadly, modern medicine hasn’t entirely pinpointed how it happens either.  I told myself to get over the “Why?” question.  I didn’t see the point when facing the daunting gauntlet of the new treatment regimen.

‘I had become the bubble girl.’

Last time it had been eight five-hour infusions every other week for four long months; the first four were a drug called Adriamycin, also known as Doxorubicin, which is 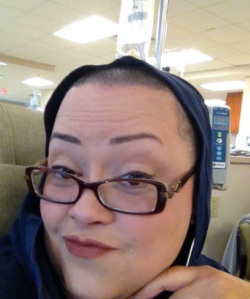 nicknamed “the red Devil” for what it does to the body.  It kills everything; not just cancer cells but healthy cells and — in my case — white blood cells.  For me, it brought crushing exhaustion and debilitating pain that seemed to ooze out of my bones. But the worst part, the part that actually kept me out of work, was the consistent drop in my white cell count.  Every time I received chemo, my white cell count would drop to 100 or less.  A healthy human’s white cell count is anywhere between 5,000 and 10,000.

I had no immune system.  I couldn’t be around people at all.  My doctor ordered home confinement.  I had become the bubble girl. I even had to wear a mask around my husband in case he brought germs home.  For a self-admitted workaholic, it was torture to be stuck at home with no contact with anyone and no work to keep me occupied.  Daytime television is not what it’s cracked up to be.

‘This time around, the drugs are much more tolerable.’

The last four chemo sessions were a drug called Taxol, which my chemo nurse Jackie told me was usually better tolerated.  The pain began to lessen and the exhaustion eased up, but my white cells stayed low even with injections of Neulasta, meant to increase production of baby, germ-fighting white blood cells.  I quickly realized I wasn’t tolerating it as well as we hoped.  I woke up in the middle of the night and went to the bathroom. When I came back I felt something on the bottom of my left foot.  It felt like one of those little stickers that come off produce.  I grabbed the “sticker” and yanked. It wasn’t a 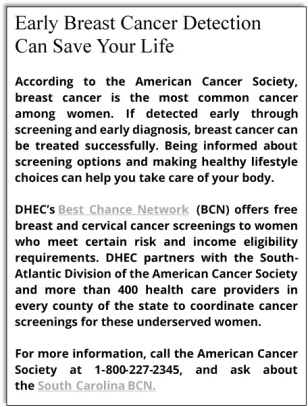 Click here for more information on the Best Chance Network.

sticker.  It was a chunk of skin from the bottom of my foot.

In just a few hours since I had gone to bed, the skin had begun peeling back from my palms and soles of my feet.  It looked like dozens of little curly Q strips that had separated and were already dry and stiff.  My fingernails that had already turned black from the Adriamycin where now separating from my nail beds; the tip of the nail extended halfway back into the nail bed.  I actually pulled out medical tape and put it around each finger until I could see Dr. Wells the next morning.  He told me to cut my nails down as far as I safely could and use the medical tape to help re-attach the nails to the nail beds.  Losing a nail would cause a wound that could lead to an infection.

This time around, the drugs are much more tolerable. One is called Carboplatin; the other is Gemzar.  I’m slated to have eight infusions spread out over almost six months. The first Wednesday I went in for an infusion that lasted about two hours; the next Wednesday another one for another few hours. The two sessions amounted to one infusion.  Then I had a week off while my medical team checked my numbers.

‘I’m aware that this will get worse this time’

As long as my numbers were within the desirable range, I’d be allowed to continue on with the next two sessions for my next infusion; then another week off for testing.  This is my routine until we complete eight full infusions.  I should be done sometime near the end of April; after that surgery and the six weeks it will take to recover.  We’ve decided to remove both breasts completely.  The chances of recurring breast cancer are pretty small if you remove as much breast tissue as possible.  We’ll be able to remove about 90-95 percent; you can’t remove every inch without cutting into the muscle below it.

While early into these chemo infusions, I can already feel the difference.  There is less constant pain.  It’s more like spasms in my breasts, legs, hands and feet; even my fingers lock up unexpectedly.  I spend a lot of my off-time massaging my muscles to keep them from locking up.  I have patches of joint ache and neuropathy; pain, tingling and numbness in my hands and feet.

Towards the end of my last treatment I had to use a cane to get around safely; at age 40.  I’m aware that this will get worse this time, because chemo treatments are cumulative and get worse as you endure more of them.  I haven’t lost my hair yet; last time it started failing out after two weeks.  But that is a side-effect of both of these new drugs so I’m not holding out hope.  Hey, I’ll save money on haircuts, shampoo and conditioner, so that’s not so bad.  Like last time, I can smell better than most bloodhounds.  I swear, it’s ridiculous how keen that sense of smell has become.  My sense of taste comes and goes and I’ll probably lose it again.  No nausea yet and my nails and skin seem intact for now.

Once again some incredible good has come from even this horrible situation.  My white cell count this time is hanging tough so I can still work.  The sanity that brings is indescribable.

‘Blessed to be surrounded by the most loving, caring and amazing people’

I once again see how I have been blessed to be surrounded by the most loving, caring and amazing people.  They ask me everyday what they can do to help.  I actually feel bad when I only say prayers and make me laugh every chance you get.  I don’t have a lot I 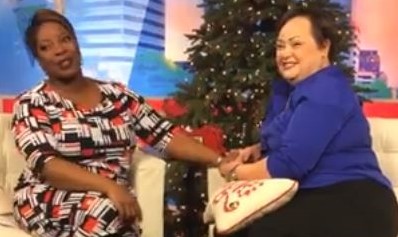 need just yet.  My husband has become my personal chef, making me my favorite meals to make sure I eat and keep my strength up.  The outpouring of support, prayers and well-wishes has brought me to tears.

Don’t get me wrong; I wouldn’t turn down a winning lottery ticket or as my husband says “a box of hundred dollar bills” because the treatment is far from cheap and every visit or treatment results in another co-pay or balance due.  I certainly understand what is meant when I hear that most American families are one major medical event from bankruptcy.  One of the things I was looking forward to with the two-year anniversary was the end to major medical payments and a chance to pay everything off and start saving for a house again.  But that’s not quite on my mind right now nor is the reconstruction I would need after the double mastectomy.

On the positive side again, I have had so many sweet wonderful people volunteer to come sit by my side as I receive the infusions.  As wonderful as their offers are, I have turned every one of them down, including my husband’s.  For me, to keep focused during this new fight, I need to just put the blinders on and “headphones in” and push through each one while I work through emails and work projects.  I worry that if I break my concentration I won’t regain the strength I need to make it through them all.

‘To all my fellow survivors, keep fighting’

I am convinced I will make it. As my Dad said when I told him about the diagnosis, “OK.  That’s not ideal.  Now what are we going to do about it?” I’m my Daddy’s girl.  When these things happen, take time to sort through the feelings and the devastation. When you’re ready, stand up and fight.

I’ll make sure to let you all know how it’s going and whether we win this round too.

To all my fellow survivors, keep fighting… as long and as hard as we can to squeeze every moment of joy, happiness and love out of this life.