Our next installment of the 2018 Live Healthy State Health Assessment summaries covers chronic disease and risk factors. Because this section lists many chronic diseases that affect South Carolina, we will summarize in three sections. Check out our previous posts:  overview of the report, South Carolina demographics, leading causes of death and hospitalization, cross-cutting, access to healthcare, and maternal and infant health.

Prediabetes, sometimes called “borderline diabetes” is a condition in which someone has a blood sugar (glucose) level above normal but not yet in the diabetes range. People with prediabetes are more likely to develop type 2 diabetes, heart disease, or experience a stroke. Without lifestyle changes to improve their health, 15% to 30% of people with prediabetes will develop type 2 diabetes within five years. 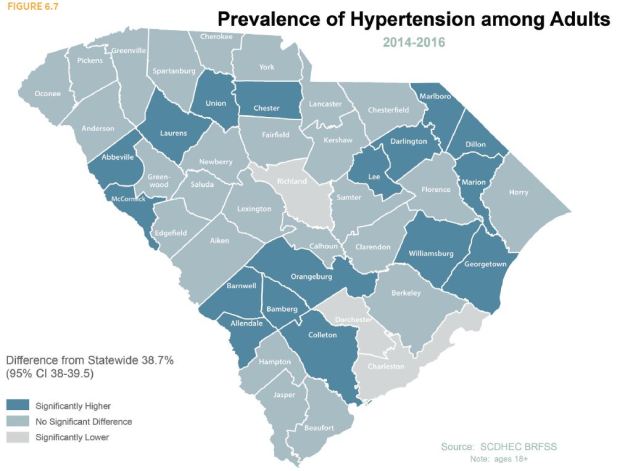 Hypertension, commonly known as “high blood pressure,” is often called the silent killer because, apart from extreme cases, it has no symptoms. Nearly one in three United States adults have high blood pressure.

Arthritis is the term used to describe more than 100 diseases and conditions that affect joints, the tissues that surround the join, and other connective tissue.

About 610,000 Americans die each year from heart disease. Heart disease is the leading cause of death and disability in the United States.

In our next section, we will summarize nutrition, physical activity, and cigarette smoking in South Carolina adults. For more detailed information about chronic diseases and risk factors that affect our state, visit https://www.livehealthysc.com/uploads/1/2/2/3/122303641/chronic_disease_and_risk_factors_sc_sha.pdf.

Did you know that six in ten adults in the United States have a chronic disease and four in ten adults have two or more?  Chronic diseases are defined as conditions that last one year or more and require ongoing medical attention or limit activities, daily living or both.  They include but are not limited to:

Heart disease, cancer and diabetes are the leading causes of death and disability in the United States.  According to the Centers for Disease Control and Prevention (CDC), many chronic diseases are caused by a short list of risk behaviors:

Chronic Disease Day was created to raise awareness and increase adoption of self-care best practices to encourage prevention and reduce risk.  Use today to kickstart a healthier lifestyle.  Here are some tips for better self-care:

Priority 2 of the South Carolina State Health Improvement Plan is detailed with ways community partners plan to promote healthy lifestyles and environments that prevent chronic conditions. A glance at our state’s current chronic disease statistics can be found in the 2018 South Carolina Health Assessment, where the assessment analyzes obesity, prediabetes, diabetes, hypertension, nutrition, physical activity, arthritis, heart disease, stroke, cancer and smoking from 2011 to 2016.  South Carolina adults have higher rates than the national average in nearly every category of chronic disease.

May is National Stroke Month.  Did you know that up to 80% of strokes in the United States are preventable?  Use this month to prioritize healthy lifestyle choices that lower your risk.

Stroke is the number five killer and leading cause of disability in America.  While there are some risk factors that are beyond your control (i.e. age, family health history, race, gender, etc.), take the necessary steps to pay attention to what you can control.  According to the American Stroke Association, these are the risk factors to watch:

If you have some of these risk factors or are unsure of your risk, take the Stroke Risk Quiz now. 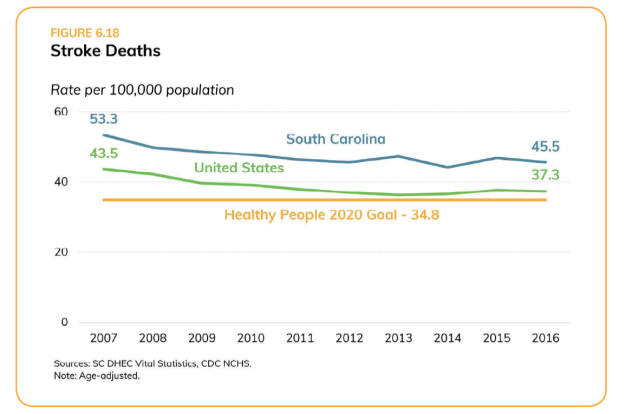 Take the time to educate your loved ones about stroke prevention.  Visit the Centers for Disease Control and Prevention (CDC)’s website:  www.cdc.gov/stroke.  For more information about South Carolina health statistics, view the 2018 State Health Assessment Report.

Not only is getting good, quality sleep important to your energy levels, it’s also important for your health, including your heart health.

Sleep plays a key role in helping your body repair itself. Getting enough good sleep also helps you function normally during the day.

The Centers for Disease Control and Prevention offers the following tips on sleep.

How much sleep do I need?

Most adults need at least seven hours of sleep each night. Failing to get enough sleep over time can lead to serious health problems.

What health conditions are linked to a lack of sleep?

Adults who sleep less than seven hours each night are more likely to say they have had health problems, including heart attack, asthma, and depression.

What sleep conditions can hurt my heart health?

Sleep apnea happens when your airway gets blocked repeatedly during sleep, causing you to stop breathing for short amounts of time. Sleep apnea affects how much oxygen your body gets while you sleep and increases the risk for many health problems, including high blood pressure, heart attack, and stroke.

Insomnia is trouble falling sleep, staying asleep, or both. As many as one in two adults experiences short-term insomnia at some point, and 1 in 10 may have long-lasting insomnia. Insomnia is linked to high blood pressure and heart disease. Over time, poor sleep can also lead to unhealthy habits that can hurt your heart, including higher stress levels, less motivation to be physically active, and unhealthy food choices.

What can I do to get better sleep?

Visit the CDC’s website for more information on getting good sleep.

The S.C. Department of Health and Environmental Control recently published a press release reminding parents to practice safe sleep habits with infants. The agency reported that six infants in South Carolina die each month due to sleep-related deaths.

Study aims to protect water at the source

The clean air and water, mountain views and scenic rivers that attract so many people to the Upstate is the driving force behind a watershed plan being developed for the 220,000-acre Tyger River Watershed Basin.

Keeping it beautiful and clean for future generations is the goal of Upstate Forever, a Greenville-based land conservation organization that is parlaying a $40,000 federal grant into a plan to identify sources of water pollution as well as areas deemed “critical” for protection or restoration.

High blood pressure and high cholesterol — two risk factors for heart disease — are more common among workers exposed to loud noise in their workplaces, according to a recent study from the Centers for Disease Control and Prevention (CDC).