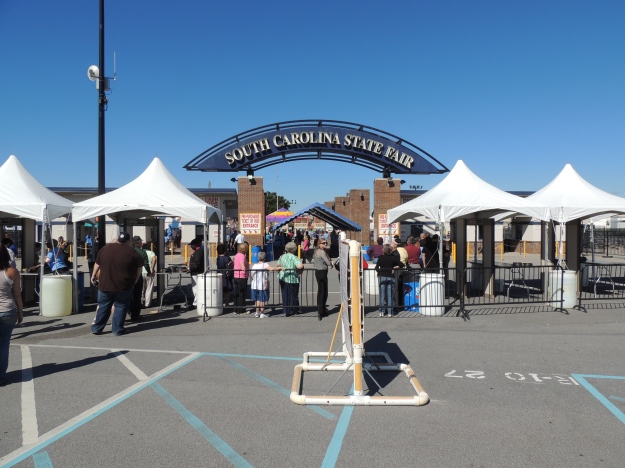 The 149th annual S.C. State Fair will soon be open (October 10-21) and attendees of all ages will once again enjoy funnel cakes, live music, and amusement rides. To help ensure you enjoy your time at the fair, listed below are a few health tips to keep in mind while strolling beneath the neon lights of the Midway.

“Keeping hands clean is one of the most important things we can do to stop the spread of germs and stay healthy.” (CDC, 2017)

Following these tips will help prevent infections.  Have fun!

Center for Disease Control Food Safety at Fairs and Festivals

KNOW How to be Safe Around Animals

I wouldn’t be here today if not for this health center. I didn’t realize all the help they offer and how many people use them until I became a patient … The staff has always treated me with the utmost respect. I can never thank them enough. I’ll have a place in my heart for these folks for the rest of my life.” -Phillip, a patient at a health center in Virginia

For Phillip and more than 27 million other adults and children across the country, health centers provide affordable, high-quality and patient-centered primary healthcare that would otherwise be out of their reach.

Extremely hot weather can make you sick. Stay cool and hydrated to protect yourself. The Tracking Network provides data and tools that you can use to see how extreme heat may affect your health. — From the Centers for Disease Control and Prevention’s (CDC) Your Health – Your Environment blog

When to seek care for a sinus infection

Most adults have experienced a sinus infection and know how annoying and painful they can be.

Acute sinus infections generally stem from the common cold. The pressure felt in the face, forehead and behind the eyes is caused by the inflammation of the sinus cavities and nasal passageway. — From Flourish, Palmetto Health’s blog

Building a “Culture of Preparedness” and readying a nation for disaster isn’t limited to the United States.

A three-day summit at the Emergency Management Institute that focused on emergency management training and education continues the collaboration between FEMA and Mexico’s National Center for Disaster Prevention.

Supported by the U.S. Northern Command’s Humanitarian Assistance Branch, the two agencies agreed to a six to 10 year project that will strengthen emergency management training and education in both countries. They committed to sharing knowledge in emergency management training, exercises, and education to support and enhance the capacities of the each nation. — From the Federal Emergency Management Agency (FEMA) blog

A pain in the neck

Do you ever wake up with a stiffness in your neck? What about pain in your neck that gets worse after holding your head in one place for a long time? These are typical signs of neck pain. Other symptoms of neck pain include muscle tightness and spasms, headaches, decreased ability to move your head, and difficulty sleeping.

Approximately 10 to 25 percent of people complain about having a severe neck pain episode at least once in their lives. Aging and everyday damage contribute to the commonness of neck pain, and while these causes of neck pain cannot be avoided, there are many that can. — From Flourish, Palmetto Health’s blog

In 2016, 115 Americans died every day from an opioid overdose – that is more than 42,000 drug overdose deaths that involved an opioid including prescription opioids, heroin, and/or illicitly manufactured fentanyl. Prescription opioids (like hydrocodone, oxycodone, and morphine) are prescribed by doctors to treat moderate to severe pain, but have serious risks and side effects.

Anyone who takes prescription opioids can become addicted to them. Families across the county are dealing with the health, emotional, and economic effects of the opioid epidemic. The opioid overdose epidemic is a public health emergency and Americans of all races and ages are being killed by opioid overdoses. — From the Centers for Disease Control and Prevention’s (CDC) Public Health Matters blog

Air Quality Awareness Week raises mindfulness about the importance of air quality issues. The USDA Forest Service commemorates the week and its 2018 theme “Air Quality Where You Are” with partners. This year, the Forest Service is featuring one area where air resource management is essential – wildland firefighting.

Recognizing the growing threat that wildfire smoke poses to the health and safety of the public and fire personnel, the Forest Service partnered with other federal, state and tribal agencies to implement a proactive and determined response. This included development of new modeling techniques to more accurately characterize emissions from wildfires. It also included creation of a new position in the fire organization – the Air Resource Advisor (ARA). — From the US Department of Agriculture (USDA) blog

A Back to Basics Approach to Prevent Infection

It was hard to see it happen. We were watching a friend’s basketball game when the young boy fell down and began to bleed from a cut on his arm. The referee sent him out of the game and over to his coach who took out a bandage and slapped it on the wound without cleaning the cut. Calling a time-out, the coach put the boy back in the game.

My daughter and I looked at each other in disbelief.  My son, her brother, Rory, had fallen playing basketball in 2012. The gym teacher had applied a bandage without cleaning the wound. Despite us bringing him to his pediatrician and hospital when he began to feel ill, Rory died from septic shock four days later. The source of the infection that ravaged his body is believed to be from the scrape on his arm. — From the CDC’s Safe Healthcare blog

A Less Allergenic Peanut Extract for Use in Allergy Treatment

As baseball season gets into full swing, many fans enjoy traditional ballpark favorites like peanuts. But not everyone can safely savor this popular treat. Peanuts induce an allergic reaction in millions of Americans.

Peanut allergy is a major public health concern, especially for children. “This is the most common cause of anaphylaxis in children and has become more prevalent in recent years,” says recently retired Agricultural Research Service (ARS) food technologist Si-Yin Chung. Anaphylaxis is a potentially life-threatening allergic reaction that has a quick onset. — From the USDA blog

Sepsis is the body’s overwhelming and life-threatening response to infection that can lead to tissue damage, organ failure, and death. In other words, it’s your body’s over-active and toxic response to an infection.

This Sepsis Awareness Month, celebrated each September, take steps to learn more about sepsis and raise awareness in others. It could help save lives.

Some people are at higher risk

Your immune system usually works to fight any germs (bacteria, viruses, fungi, or parasites) to prevent infection. If an infection does occur, your immune system will try to fight it, although you may need help with medication such as antibiotics, antivirals, antifungals, and antiparasitics. However, for reasons researchers don’t understand, sometimes the immune system stops fighting the “invaders,” and begins to turn on itself. This is the start of sepsis. 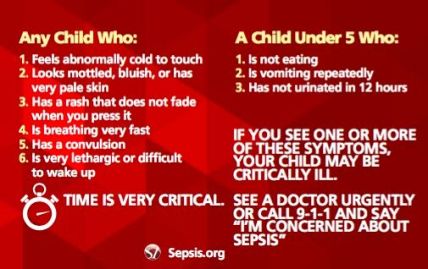 KNOW THE SIGNS OF SEPSIS IN CHILDREN.

Patients are diagnosed with sepsis when they develop a set of signs and symptoms related to sepsis. Sepsis is not diagnosed based on an infection itself. If you have more than one of the symptoms of sepsis, especially if there are signs of an infection or you fall into one of the higher risk groups, your doctor will likely suspect sepsis.

You can help by learning more and knowing the symptoms of sepsis:

Sepsis progresses to severe sepsis when in addition to signs of sepsis, there are signs of organ dysfunction, such as difficulty breathing (problems with the lungs), low or no urine output (kidneys), abnormal liver tests (liver), and changes in mental status (brain). Nearly all patients with severe sepsis require treatment in an intensive care unit (ICU). Septic shock is the most severe level and is diagnosed when your blood pressure drops to dangerous levels.

Sepsis has been named as the most expensive in-patient cost in American hospitals in 2014 at nearly $24 billion each year. Forty percent of patients diagnosed with severe sepsis do not survive. Up to 50 percent of survivors suffer from post-sepsis syndrome. Until a cure for sepsis is found, early detection is the surest hope for survival and limiting disability for survivors.